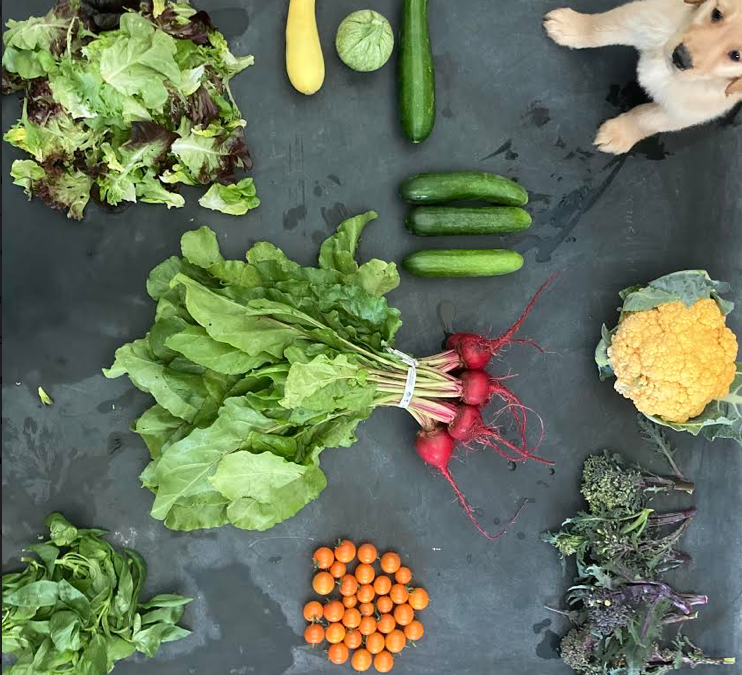 When I first moved to Montana, an old timer told me that there were two seasons in this state: winter and July. While the cold climate has certainly moderated a bit as of late, the fact remains that July has always been the month where you can count on warm, sunny weather. This week certainly fits that bill. The fact that it’s been rather cool up until recent makes for an odd anomaly on the farm. The warm weather crops are starting to really produce…especially the cucumbers and summer squash, but we also have a new batch of beautiful broccoli, and the cauliflower continues to look great with very little bug pressure, which is unusual for the heat of summer. As far as growing seasons go, it’s been a good one. Hopefully the old timer isn’t too right, and the season doesn’t make an abrupt end any time soon.

Farming vegetables in Montana is a funny thing. Over the years, I’ve noticed a pattern. For about 5 months of the year, you plan and strategize about all the things you are going to do, or do differently in the upcoming season. Then it seems to take forever for the snow to melt and the ground to dry. And then you basically have May and June to get everything into place. Taking on new projects like cover cropping, or adding soil amendments, changing systems, or using compost extracts or teas…it all has to happen in those first couple of months in order to benefit that season. July tends to be too hot and dry for those types of things, plus we’re swamped just trying to keep things irrigated and harvesting the abundance. And once August arrives, you’re already looking ahead to next year to make the changes you couldn’t make this year. But recently I’ve noticed I’ve been a bit delusional about one thing. I always tell myself that while I’m working like crazy in May and June, that once July rolls around, the farm will be on cruise control and I’ll be able to take a little bit of time off. Wrong. The farm never slows down. There is always more on the list. The truth is, you just have to step away from it all and let some things go undone in order to get out and enjoy the best of what Montana has to offer.

The crew was shocked to learn that Rebecca and I have never both been off the farm at the same time for an overnight trip during the main season (May through October) in the entire 13 years we’ve been farming. Just too much to do, and not willing to risk anything going wrong. Well, this weekend, we broke that streak. And I think that is a really good thing. We headed over to Fairfield, MT to get this little fella. Yep, Henry now has a little brother. They say two is easier than one, right?!

And if you’re going to drive to the East Front, well, you have to go into the Bob Marshall….if only for one night. It was a great reminder of all the adventures I had in the Bob during my earlier years in Montana, and it is still as beautiful and awe inspiring as ever.

We got home Sunday night, and lo’ and behold, the farm was still here. This week the CSA is going to have some items in it that are threatening to take over the farm. In order to not get buried in them, there will be beautiful heads of Cheddar Cauliflower, lots of zucchini and cucumbers, and some purple broccolini. I find the cucumbers to be a refreshing salad in this heat, and have moved away from the salad mix, and more towards cucumbers. While the rodents and weather dinged up the first batch of beets, the current batch is looking really good, so full shares will get a bunch of those. The Sungold tomatoes have also just started to produce, and I’m sure some of you have noticed a few pints at market, but when you have 342 CSA shares, it’s hard to split up a few pints equitably, We’re hoping that this is the week the plants produce enough to get them to everyone. If not, we will divy them up and make sure anyone who misses out certainly gets them next week. I have to remind myself that ripe tomatoes in July in Montana is a high bar to try to hit every year. As for recipes this week, I should mention that the beet greens look great, and you should really consider eating them! This guy certainly agrees, and offers up 15 options. Or how about a beet noodle dish with spicy peanut sauce?

Well, if you like the heat, I don’t know why you moved here, but this is your week! Enjoy it, and we’ll see you at CSA!