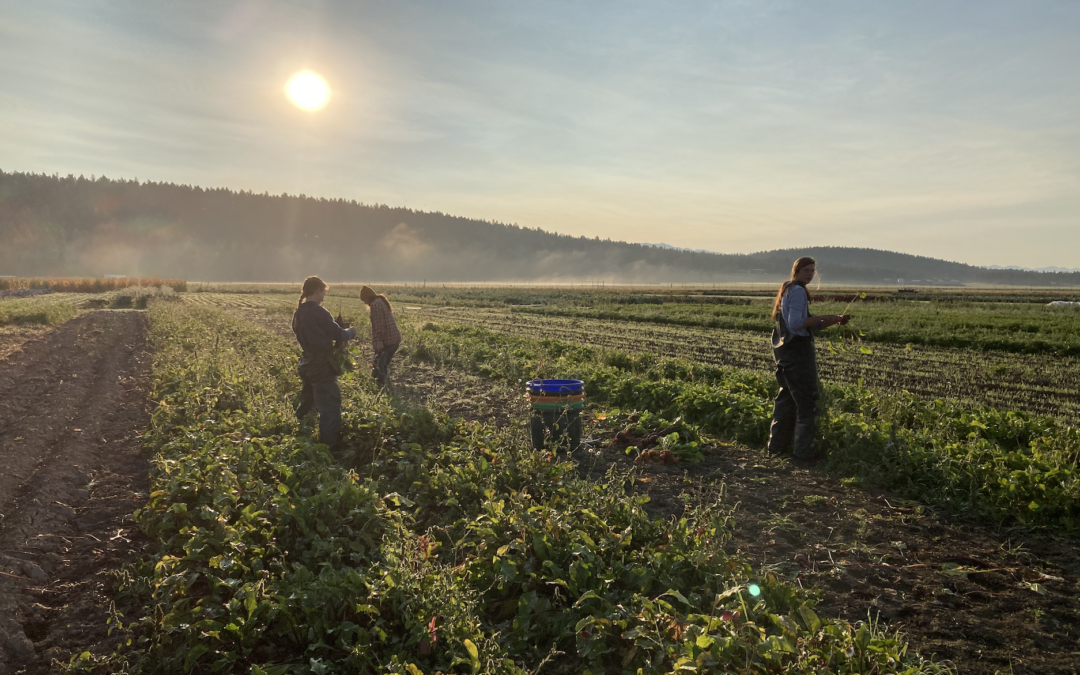 Partial Share: Same as above…still a bit of a mystery at this point.

If we are what we eat, then I am a tomato.  Well, maybe 50% tomato, 20% cucumber, 15% venison sausage, and 15% quesadilla.  I just can’t get enough of the tomatoes this year! But it’s good to get them at their best, when they are in season, because they won’t be around much longer.  And in Montana, they are a treat, as fresh, vine ripened tomatoes are hard to come by!

Fall has settled in.  As usual in this part of the valley, the full Harvest moon ushered in our first frost.  Except, as is also typical in this corner of the valley, the “frost” is often a lot more like a freeze.  Instead of easing into it with a 32 degree night, we get slammed by 26 degrees on Saturday morning.  We knew it was coming, but there is only so much one can do at that temperature to save plants.   For the most part, we protected everything we wanted to….except the salad mix.  It definitely took a hit, and that’s a big bummer.  But the tomatoes made it! (being as they are in high tunnels).

And honestly, that’s ok.  What Mother Nature giveth, Mother Nature taketh away…it’s all part of the cycle. It’s been a long, trying season of farming, and reaching the end is not necessarily a bad thing.  There is still so much bounty to be enjoyed the next few weeks.  And just a few days ago, we announced that we will once again be holding our annual Stock Up Sale event at the farm on Thursday, October 6th from 4pm until dark, so mark it on your calendars.  We weren’t sure, with all the crop damage this spring, if we’d have enough food for the sale. But we’re going to go for it because we’ve heard from so many people how much they enjoy it, and we’ll once again be bringing in our friends from Harlequin Farm, and others, to fill in the gaps. To be honest, I really love this time of year. Harvesting both meat and vegetables to put up for winter, cleaning up the farm, chopping fire wood, and enjoying the cooler days and the migration of the birds…..to me, this is such a grounding time.

It’s also a time of year where we balance the exhaustion of the season, with the gratitude of being where we are, doing what we believe in. But with all the changes in our community the past few years, even that has weighed heavy on me. Watching home prices increase 300% (last I heard the new median home price in Whitefish is $940,000!!) has been a shock. While I realize there are many who are benefiting from the boom, there are also many who have been displaced by it. And as a business that focuses on community (and needs employees), it really challenges what it means to be a “community”. The change we have seen the past 3 years has forever altered the trajectory of Whitefish, in many ways that I don’t think we yet recognize.

I was on a zoom call last week  with farmers and healthy food advocates from all over the state, hosted by GrowMontana, a Montana nonprofit focused on state and federal policy regarding equitable food systems.   Years ago, they had calculated a statistic I myself often quote, which is…”In 1950, 90% of the food consumed in Montana was grown in Montana.   By 1990, only 10% of food consumed in Montana was grown in Montana”.  Despite all the agriculture we see around us, the Big Ag industry, and it’s spokesperson, the USDA, has decided that growing crops for export is the priority. It has proven not to be good for farmers, but it’s a way to concentrate wealth in the hands of the industry itself.  So while industrial commodity agriculture advertises that it is “feeding the world”, what they fail to mention is that they aren’t feeding their own communities, and more and more regions of America are becoming food deserts.   And I believe that therein lies a huge opportunity for farmers to step away from an industry that does not serve them, and in which they often feel trapped, and instead begin to focus on rebuilding local food systems and bringing health back to their communities. Imagine how much pride and meaning that might re-inject into a troubled ag sector that has a suicide rate that is 3x the national average. But, the point of my story, is that GrowMT just updated the statistic.  As of 2020, only 3% of food consumed in Montana is now grown in Montana.   If you believe in healthy, local, nutritious food, then you realize we, as a society and a culture, are losing ground to the industrial system.  It’s really no surprise, given the industrial system has the full backing and support of the USDA, but it is very disconcerting to those who care about health, nutrition, rural communities, and land stewardship.

And why that matters to me, is it just adds more pressure on our farm to hold space for good food. I know how meaningful it is to me to have access to healthy food. So much so, that I’ve dedicated my life to it. And I’ve heard from so many of you, and our market customers, how much it means as well. I am troubled by the reality that already, so much of our population has lost access to that type of food. And don’t get me started on the status of public school lunches, which was also a topic on the call. Let’s just say that the wave of young new farmers who I was hoping would come in to take up the cause has not yet materialized ( I think they all went into real estate), so I feel a bit trapped between a rock and a hard place. This strong sense of service to grow healthy food for my community, while also the personal responsibility to look out for my physical and mental health. I’ll admit, I’m ready for some reinforcements. Still, to this day, I take solace in the fact that regardless of where the country is headed, and regardless of what has happened in our community, we still have the opportunity at the community level, here in the Flathead, to have a healthy food system. Many will not choose it, but simply to have it available to those who would like to choose it, is a huge accomplishment. And I know I mentioned I was going to talk about SaveFarmland at some point, but that will again have to wait for another day.

As will any more pondering on these subjects. Now is the season to finish the work, have gratitude for all the bounty and experiences we’ve had, get together as a community to celebrate, and then begin to seek more balance and rest.

I would be remiss if I did not once again mention that the CSA runs for 18 weeks, so there is basically this week, and next week.  That means the last share pickups will be between Wednesday, Sept. 21st and Saturday, Sept 24th (depending on your pickup location). And I will also mention that that the items listed above in your shares may be subject to change…but whatever you get will hopefully be delicious.

Noa is on vacation through the end of CSA, so Whitefish will be getting a guest appearance by yours truly the next two weeks! See you at CSA!