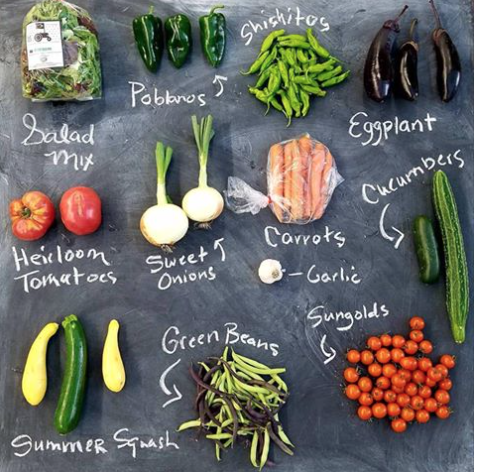 It’s hard to believe it’s the last week of August already, but summer is holding on with temps still in the 90’s!  We’ve managed to avoid frost so far, which means the summer crops are still cranking along.  The crew managed to harvest over 400 pounds of tomatoes today, so you’ll be seeing your tomato serving increased this week! Cool shot from the garlic packing party in the greenhouse this weekend.

Next week is traditionally the week that winter squash starts to show up in shares, so before we make that shift to Autumn, we want to do a big share this week of all the main season crops.  That means tomatoes, beans, peppers, eggplant, basil, summer squash, and basil.  While I consider a person in possession of all these things to be rather rich, these are the basic ingredients that the poor farmers of France used to cook the traditional dish of Ratatouille.  There should be enough Sungold tomatoes this week that you might  actually have a few left over by the time you get home from pickup.  Here’s a pasta version if you’re interested.  And I get the sense that there’s not a whole lot of Italian influence in the cuisine of the Flathead Valley, as evidence with folks seeming uncertainty regarding eggplant.  Here’s a delicious easy option for some eggplant hummus.

Enjoy the warm weather and the beautiful sunsets!  We’ll see you at CSA distribution.

A Pandemic of Possibility

The Season for Learning