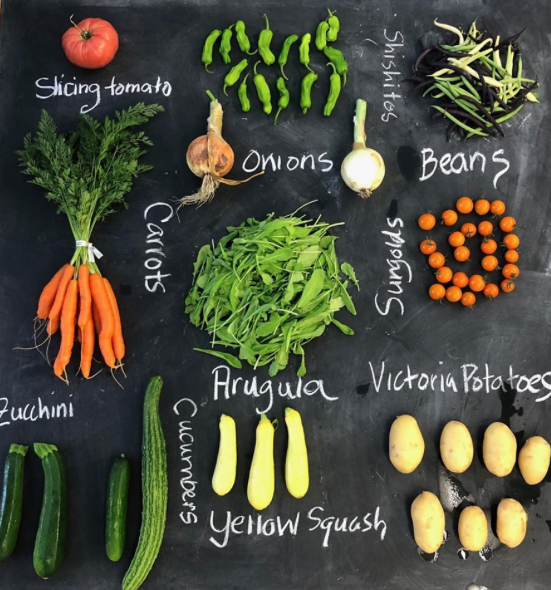 Well, that was a quick summer 🙂 I have to say, today was a perfect harvest day…cloudy and cool until late into the afternoon. It probably didn’t help the sweet corn ripen any, but the other crops seem to be doing just fine. After such a frightening forecast for this past weekend, we ended up getting very little actual rain. But, it was enough to soften up the soil in the potatoes to make for a better harvest. As you may have noticed last week, freshly dug potatoes have extremely thin skins that get easily damaged during harvest and washing. A more traditional approach is to wait for frost to kill off the potato plants, then let the tubers sit in the ground for 2 more weeks so that their skins “set”. This allows for a harvest without damage. But, in order to eat potatoes in the summer, one must remove the plant tops another way. Our preferred choice is a flail mower that obliterates the plant into organic matter that goes right back into the soil, which, I might add, is a much healthier alternative to spraying with them with Roundup(glyphosate) to burn the tops off. Yes, that is a method in conventional agriculture. Not just on potatoes, but on wheat, sugar beets, oats, etc. just weeks before you consume them. Did you know that 8 of the 10 leading breakfast cereals test positive for glyphosate residue? And that conventional potatoes are a member of the “dirty dozen”, which are the 12 vegetables that expose consumers to the highest levels of dietary pesticide intake? ) Remember last week I mentioned consumers and farmers need to have a serious conversation about chemical use on our food…well glyphosate “desiccation” of food crops right before harvest would be a great place to start. But I digress. A few days after mowing the tops off, we harvest them with our potato digger (because who wants to wait two weeks to eat potatoes!). As the potatoes move through the harvester with all the chucks of dry, rough soil, they tend to get dinged up, hence the peeling skins you see on early potatoes. When it rains before harvest, such as this weekend, it softens those soil clods and makes for less damage, hopefully. I know, probably 7 sentences more than necessary to say “pardon the dinged up potatoes”, but hey, maybe someone was curious?!

While last week’s share was dense, I will admit it was a bit underwhelming in appearance. This week, however, is a share that’s tough to beat. Juicy cucumbers, two types of tomatoes, green beans, shishito peppers, potatoes, and carrots….even a fresh batch of arugula…yum. Definitely a peak season type share.

For those of you who are new to shishito peppers, they are mild and most commonly served by searing them in a hot pan with a little oil in it, flipping them once so that both sides are lightly browned. Tonight, Rebecca splashed in some liquid aminos as well. Then sprinkle with sea salt, and eat the whole thing except the stem. A great snack or appetizer.

Well, after seeing myself on the cover of the Daily Interlake last week, I obviously need my beauty sleep, so I’m off to bed. See you at CSA pickup!

A Pandemic of Possibility

The Season for Learning