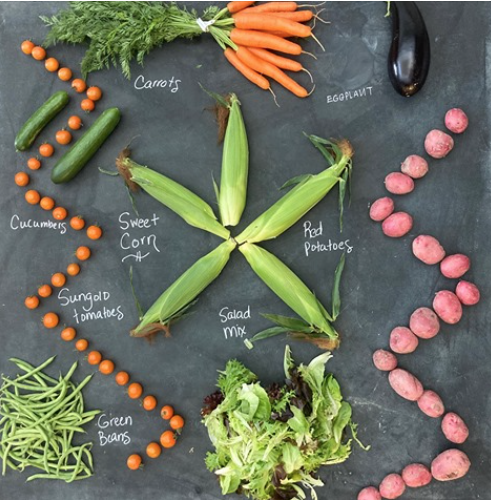 Summer is back! For how long is anyone’s guess. The fact that we already had back to back frosts last week is quite unnerving. To go from 30 degree mornings to 90 degree afternoons in the span of a week is…. bewildering. But that is farming in Montana, and we’ve learned that pretty much anything is possible at any time. The farm has yet to showcase it’s summer wares, so it’s a good thing that the weather has warmed back up. This week is quintessential summer….sweet corn, tomatoes, eggplant, green beans, and potatoes. The crew is busy cleaning the garlic in the greenhouse in hopes that we can start adding that to shares in the next few weeks, and the cucumbers are still rolling along. Right now the goal is to keep the irrigation moving around enough so that our summer crops continue to mature, without losing our newly seeded fall crops do to heat. When the season will really end, no one knows, but we always forge on with optimism that this is going to be good, long season.

This time of year a temptation settles over Rebecca and I to start to relax a bit, as the scope of our work begins to narrow (and we should know better, because the proven rule is not to let up until week 20 is done). The planting and weeding are for the most part finished, and right now we simply need to harvest, for both the week we are in, and to get storage crops out before the end of the season. But relaxing a bit is different from being lax, as we’ve also learned that now is the time to start preparing for next year as well rather than let the fields sit fallow. While so much of the work has been front loaded in the season, this is the time of year to really enjoy the fruits of our labor. After weeks of trellising green tomato plants, it is very satisfying to cruise through the high tunnel and pick 277 pounds of sun gold tomatoes in a couple of hours. Or after lots of weeding and irrigation, to finally be pulling big carrots out of the ground for bunches, or to harvest hundreds of pounds of new potatoes each day. While we are tired, this is the time of year that we want to linger a bit longer. The farm moves on an arc from brown field in April to brown field in October, but it’s the magic that happens between those months that is the prize.

As a rite of farming, I made some of the crew eat an ear of sweet corn today straight off the stalk. It’s so sweet, tender and fresh that there really is no need to cook it or slather it with salt and butter. I mean, you’re welcome to do that, but I encourage folks to try at least one ear raw on the day that you get it. It’s good to test your assumptions on things like this once in a while. And in general, you should eat your corn as soon as possible. The longer it sits in your fridge, the more sugars turn to starch, and the lower the quality gets.

As far as recipes go, this is the best time of year for “one pan cooking”, in my opinion (even though I swear by this method 12 months a year). Heat up a cast iron pan, add some oil and garlic. Then slice eggplant about 1/4″ thick, and cut each disk into smaller pieces. Add it to the pan with some sliced red potatoes, cauliflower, zucchini, broccoli, sweet corn….anything really, and then put a lid on it. Let it sauté and steam on medium heat for 10 minutes or more, flipping it with a spatula so that it doesn’t burn, maybe adding a splash of water to deglaze the pan and get the veggies steaming a bit more, and cook until the eggplant almost starts to melt into the rest of the meal. When in doubt, add a little more oil. When really tender, add a scoop of pesto to it, slice some sun gold tomatoes on top, a pinch of sea salt, and maybe a little side of sliced cucumber salad….and voila….a simple but hearty meal in about 15 minutes with all the flavors of summer.

It’s gonna be a hot one this week….see you all at CSA pickup!