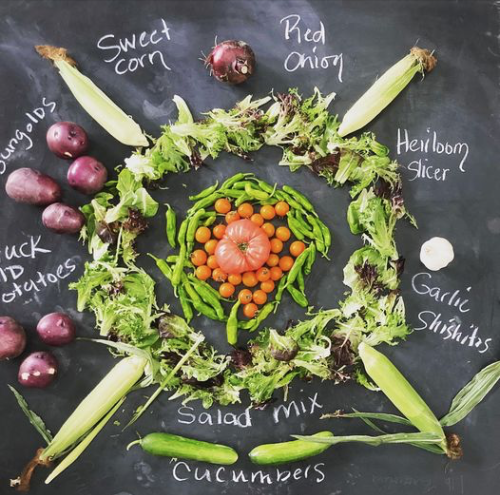 It’s week #17! While for you that may not seem any different than week #16 or week #18, for us here on the farm it’s always served as a bit of a milestone. It’s this time of year where you feel like you’ve made it through the season, and regardless of what happens from here on out, you know you have enough food to finish the CSA. While there is still a ton of work to be done, and A LOT of harvest, the pressure and stress of crop planning is over. That’s not to say that we get cocky, because we are still vulnerable to the whims of nature. Take today for instance. This is one of nature’s favorites, and we’ve seen it many times. The weather is cool, almost downright cold. The forecast calls for it to clear in the afternoon, and heat up before evening. But, instead, it stays cloudy and cool all day. Then, just when the sun goes down, it clears up! (it’s only 7pm, so that has not happened yet, but I’m just predicting it)….Farmer’s worst nightmare. The temperature is already depressed (currently sitting at 57 degrees) and will likely be down to 50 by the time the sun sets, and with the clouds gone, the radiational cooling kicks in and the thermometer plummets. We lose about 2 degrees of temperature every hour of the night, and if you haven’t noticed, the nights are getting longer these days (errr…you know what I mean). End result, starting temperature of 50 degrees, 11 hours of darkeness losing 2 to degrees of heat an hour…break out the calculators….answer, not good.

But at this point we have learned these things (yes, the hard way), so this is the time of year we strategically place irrigation lines and re-deploy the row cover to keep the crops safe. We know that more frost is imminent, our hope now is that we only have light frosts rather than hard freezes. There is nothing worse than going out to a high tunnel of tomatoes and finding that it froze out over night, and all is lost. A unique thing about farming in Montana, unlike where I grew up in New England, is that the seasons can make drastic and abrupt changes. Rather than gradually leading into fall, and harvesting the fall crops after the first light frost, here, we hustle to get any mature crop harvested and inside to protect it from a hard freeze. Today, for example, we pulled in lots of potatoes, carrots, and winter squash. More than we need for this week, but the goal is to get all the crops in and stored away. So, as glamorous as our jobs often may sound, today I harvested potatoes all morning, and I barrel washed potatoes all afternoon. Something like 2200 pounds of them. Despite what some folks might envision, it’s not all barn dances, farm dinners, and popular farmer’s markets. Growing healthy food for our community is certainly a labor of love, and more days than not it’s simply a lot of labor.

So, what fruits have our labors garnered this week? Well, it’s the last week of the sweet corn. We only do a single planting, and the first two weeks are by far the best corn. But, there are still some ears out there…some are small, some are really stubby (we call them “nubs”), but they are still delicious. They are likely getting a little less crisp, and entering the “milk stage”, but I think they are still good, if not a bit of a pain to harvest. So, Full shares will be getting a few of these this week. If not for fresh eating, then you can always freeze them for your Chili this winter, or better yet, corn fritters. Personally, I have never been one who enjoyed pancakes, but corn fritters in real maple syrup….delicious! Brings me back to my childhood. I can’t find a simple recipe that doesn’t have a bunch of spice it in, so this is the closest I can find to what I remember. I’m not talking deep fryer-style, I’m taking pan fried like a pancake…they should look like this:

And as a celebration of fall, Rebecca and I have been binging on pan-seared Shishito peppers the last two nights for appetizers. It’s really the only way we recommend cooking them as it’s so superior to any other style we’ve had them. In fact both nights, we followed that up with pan fried Jelly potatoes and broccolini, venison sausage, sweet corn (you don’t always have to eat it on the cob), sungold tomatoes, and pesto and organic veganaise mixed in. Growing up, I was not much of a potato eater. But since becoming a farmer, and eating “new” potatoes, rather than old storage Russets, it’s really been an eye opener. While the Jelly’s were super good last week, this week is the much anticipated Huckleberry Gold….by far our most asked for potato. It’s the only potato I know of that is considered low glycemic index, and it is extremely versatile for baking, frying, par-bowling, you name it. Oh, and did I mention the garlic is ready to eat! It takes a couple of weeks to cure after harvest, but this weekend we packed up our big seed orders and sorted out the rest, so it’s time to start adding garlic to all your meals.

One bit of housekeeping….It’s week #17, and we don’t offer double shares on the final week (Week #20)….which means that if you are still owed a double share, you need to request it either Week #18 or #19, otherwise you miss out. As much as I enjoyed the cool weather today, it sounds like summer is returning, so we’ll see you at a hot CSA pickup this week!