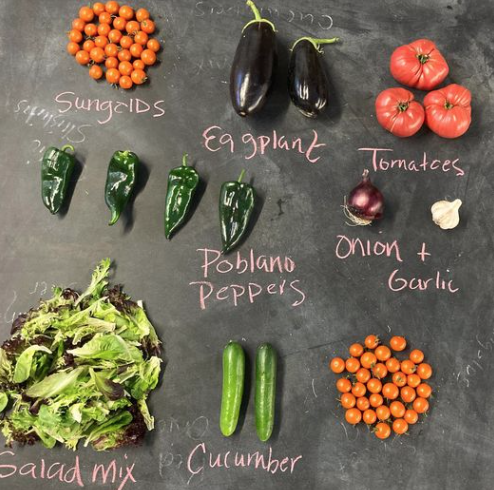 Have you ever seen a sand mandala created by Buddhist monks? Typically, a small group (usually 4) will work all day long for a couple of weeks, with great concentration, to create an elaborate mandala. Then, no sooner than they finish it, they destroy it. There are times where I feel like being a farmer is a similar experience. The growing season is so brief in Montana, that we spend immense effort and time to create lush fields of vegetables, and as soon as it seems like it is really humming along, the weather comes along and ends it, whether we are ready for it to end or not. Whether the plants all produced their fruit or not. The point of creating a sand mandala is to recognize the impermanence of life and to encourage non-attachment of material things. Which, when you are on the brink of your first big freeze of the season, are important concepts to practice and embrace.

Every season, there is a day like today. The day you realize that this is the last day to harvest certain crops before they go away. Some crops can be protected, but many others cannot, and so the entire farm team makes a heroic effort to bring in as much of the bounty as possible. To see vegetables die on the vine seems a huge waste, especially when you realize how much time and energy you have put in to their cultivation. Fortunately, we have been squirreling away storage crops for the past couple of weeks as they have become ready, so we were ahead of the game a bit. But we spent a lot of time today picking off the last of the peppers, eggplant, and green beans. We got all the onions and winter squash out of the field. The gals picked over 1200 pounds of tomatoes just to be safe…we’re hoping to heat the high tunnels and keep the plants alive, but you just never know. Once all the harvest was done, we covered the salad, set irrigation pipe where needed, and placed heaters in the tomato tunnels. The day started at 7am, and we’re finishing up at 8pm…knowing that I have to get up around 4am to light heaters and turn on the irrigation water. But, hey, look at the bright side….it should make the end of the week seem a lot easier. Regardless of the outcome, it’s been a good year and there is still plenty of food left to close out the season…but that doesn’t stop of from going to extra mile to save as much as we can.

Whether it freezes hard tonight or not (it’s already 46 degrees as I write this at 9pm, so I’m guessing it will), that prediction by the National Weather Service led to action by us, and that action has sealed the fate of many of the crops. We picked a lot of vegetables that need to be eaten fresh now, and will not last in storage. The CSA share this week has morphed a bit to reflect this reality. Rather than give you any items that can store (carrots or potatoes), we can give those out to you in later weeks. For this week, we need to eat our way through the items that won’t last. Poblano peppers, eggplant, slicing tomatoes, sungold tomatoes, and lettuce. And it wouldn’t be right to give you eggplant without some garlic to go with it.

This weekend at market, a CSA member told me that she hated eggplant (or at least thought she did), but when it showed up in her share, she decided to grill it, and she loved it. She came to market to get more! One of my favorite parts of growing fresh organic food is getting to see people test their assumptions about food. Things they think they hate, they try again, and end up loving. Some of that may be their palates changing, some may be the quality, and a lot is probably the manner in which it is cooked or prepared. Maybe this is the year you finally try Ratatouille? Or Baba Ganoush? Maybe crispy baked eggplant is more your style? Or check out some of these recipes, specifically the baked eggplant parmesan. I realize some folks might also like some help on the Poblano pepper front, but you’re on you own for that one. I think I’ve done enough for one day 🙂

See you at CSA delivery this week!

As the world turns….